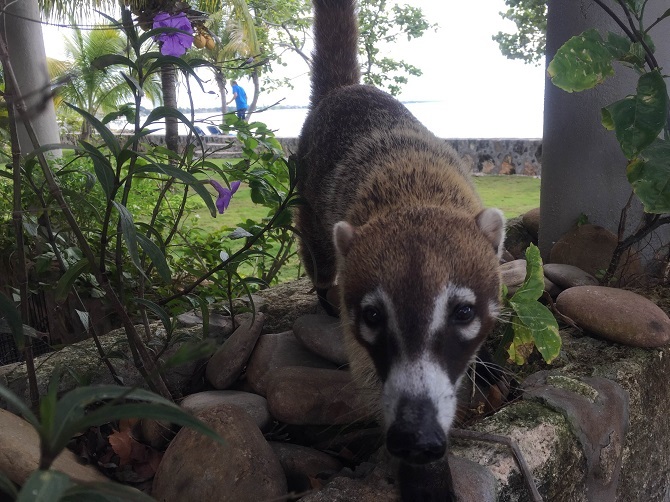 Rocky the what? You’ll have to excuse my ignorance but, until we finally met, I had absolutely no idea what a Coatimundi was. In fact, the word Coatimundi is just one of many names given to the same animal, found right across South & Central America, and better known as a member of the raccoon family.

The ‘meeting’ in question wasn’t in the depths of some impenetrable jungle but in the rather more benign surroundings of the Almond Tree Resort in Corozal, northern Belize.

Rocky is one of the resident pets – alongside a couple of dogs – and something of a star attraction. Most hotel information packs tend to focus on fairly standard rules, facilities, services etc but the Almond Tree gives over a couple of pages on information to Rocky, including how best to deal with her attentions.

Having never come across a Coatimundi before, I’m not sure quite how typical Rocky is of her species, and I don’t mean physically. Although averse to sudden movements, and possessive of sharp claws, the information provided was clear that Rocky was a friendly little blighter who just happened to be drawn, moth-like, to two specific aromas – suntan lotion and fags.

Now, although I always cover my face in high protection lotion, I can generally be found hiding from the sun, skipping from shade to shade, and am therefore slightly remiss when it comes to applying lotion all-over. Nor do I smoke. My lovely travel companion, on the other hand, is something of an industrial smoke-stack that just happens to smell of coconut while on holiday.

Having gone off in search of Rocky, we quickly found her lazily strolling along the balcony that encircles the hotel and, unsure what to do next, decided the best thing to do would be to stand stock-still. Approaching me first, she had a little sniff, a casual lick of my feet and, unimpressed, moved on to my dear travel companion. Well, that was another story. Another quick sniff, a Coatimundi light-bulb flicking on, and she was up and around her shoulders like a, well, an oddly acceptable stole.

Ok, it’s a long way to go to be molested by a small, furry animal, but if you’re passing through northern Belize, the Almond Tree is the nicest hotel in the area, and the whole Rocky experience is certainly something a bit different.