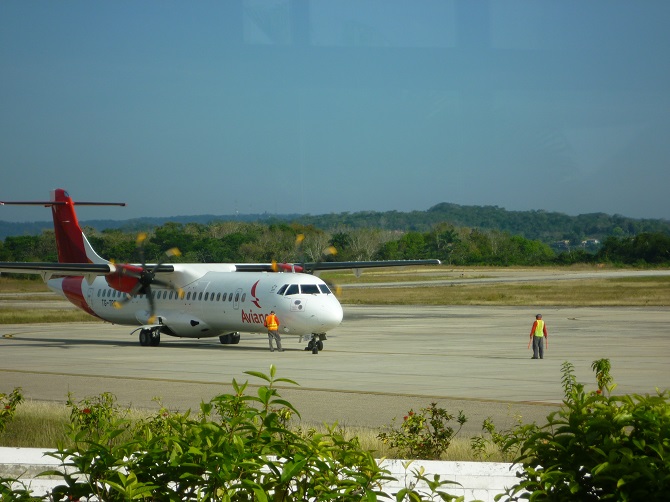 Domestic flights in Guatemala are surprisingly and refreshingly uncomplicated. With just 2 commercial passenger airports, Guatemala City and Flores, flights between the 2 destinations represent the country’s sole domestic airline route. Looking on a map, you might think that it was easy enough to simply drive between the 2 destinations but that would be to discount Guatemalan traffic which would make for a good 7-hour drive.

Even so, there are just 2 airlines operating the route and both generally only operate 2 flights a day; somewhat annoyingly too, these competing flights tend to operate entirely in tandem, both leaving Guatemala City in the very early morning for the 1 hour flight to Flores. On arrival, they simply turn around and head back to the capital before repeating the process in the evening.

The reason for these morning / evening flights is very simple, day-trippers – tourists (domestic as well as international) heading from Guatemala City and Antigua to Tikal on day trips. Unless you are really short of time it’s not really something that we’d recommend.

The choice of airline is between the tiny national carrier, TAG, and Avianca, an off-shoot of the successful national airline of Colombia. Flights on Avianca tend to be operated by modern 50 – 60 seater ATR aircraft while TAG tend to operate much smaller aircraft, often carrying no more than 16 passengers. There is no question that the Avianca flight is more spacious and comfortable and nervous flyers in particular may find the TAG aircraft a little too cosy.

It is also worth pointing out that Avianca flights operate out of Guatemala City’s modern, main international airport terminal while TAG flights operate out of a much older, somewhat homely terminal on the opposite side of the airport. If you arrive at this terminal and don’t have a transfer arranged, please note that finding a taxi isn’t guaranteed.