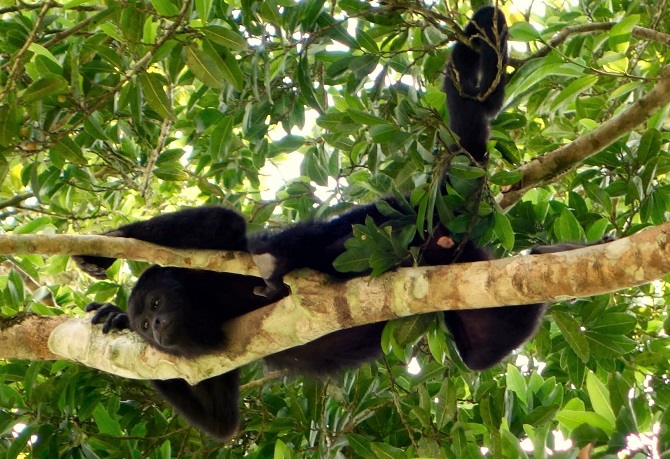 If you’d never seen howler monkeys before, but heard them calling out to each other across the jungle canopy, you might easily imagine (with a degree of trepidation if you were nearby) that they were huge, gorilla-like creatures that would make short work of any pesky, camera-wielding human that got in their way.

That was certainly my first experience, sat atop the huge, main pyramid in the old Mayan city of Yaxha in Guatemala, listening to the cacophonous roar of a multitude of howler monkeys that seemed to be all around me but which, for the life of me, I couldn’t see through the thick jungle foliage.

My second experience of howler monkeys was just across the border in Belize, at another ancient Mayan site, Xunantunich (bottom picture). This time, a troop of howler monkeys were clearly visible, hanging from a large tree not 10 metres from where I was stood. Not a squeak.

The difference between what I had expected them to look like and the reality was, well, quite remarkable. Far from being the huge, somewhat intimidating creatures of my imagination (I blame too many horror movies as a child), one can only really describe howler monkeys as being, well, ordinary. Sure, they are the largest species of monkey in the New World but they were smaller than me (which is saying something) and that was fine by me.

Intrigued by the difference between my impressions and the reality, I have since learned that the impressive roar that howler monkeys emit is a result of an enlarged hyoid bone, whatever that might be. It also came as no surprise to discover that howler monkeys are considered to be the loudest land animal and that their roar / howl can be heard some 3 miles away.

In fact, rather than me trying to explain this bizarre noise, simply watch / listen this to this brief video to hear it for yourself.