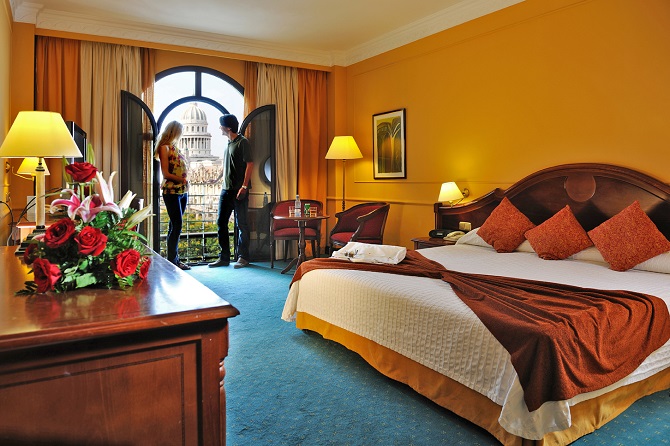 Iberostar Cuba is a division of the Spanish hotel management company, Iberostar. Currently, they manage 13 hotels across Cuba, 11 at the beach, 1 in Havana and 1 in Trinidad.

In Havana, they currently manage just the single hotel, the Iberostar Parque Central, located slap in the heart of Old Havana and consistently rated the number one hotel in the capital. The Iberostar Parque Central is actually made up of two separate structures, the ‘original’ 1990s hotel and an even newer extension that was opened a few years ago and which is connected to the original hotel by an underground tunnel. Staying in the original building would be most people’s choice (the rooms are larger and most have better views) and the views from the rooftop swimming pool, as featured in the photo above, well, they’re pretty spectacular.

Just a short walk from the Iberostar Parque Central, the new, luxury Iberostar Packard Hotel is going up at a feverish (by Cuban standards) pace and, it is rumoured, will also be managed by Iberostar. Before then, the new Havana Kempinski is set to open in early 2017 and finally offer Iberostar a run for their money in Old Havana.

Outside Havana, the only other urban hotel managed by Iberostar is in the small, colonial town of Trinidad on Cuba’s south coast. The Iberostar Grand Trinidad is a relatively luxurious, 40 room hotel that offers the only international quality accommodation for, well, a couple of hundred miles. With so little competition, securing a room at the Iberostar Grand Trinidad requires booking a long way in advance and a fat wallet – prices from 1st November 2016 have risen massively.

At the beach, Iberostar Cuba manage some 11 All Inclusive hotels spread between Varadero, Cayo Largo, Cayo Ensenachos, Cayo Guillermo & Cayo Coco. All 11 properties are in the 4 to 5* range and are consistently amongst the best in their particular category / price bracket.

Varadero is Cuba’s original and largest resort and is just 2 hours’ drive from Havana. All 4 Iberostar hotels are designed in a low-rise, village-style and the Iberostar Varadero, the most luxurious, is perhaps the best all-round hotel in the area; it is certainly the best of those hotels that accept kids (many 5* hotels in Varadero are Adult Only). The Iberostar Tainos & Iberostar Alameda are both dependable, mid-range hotels but, in our opinion, the Iberostar Laguna Azul is just too big at over 800 rooms.

On the Cayos (islands), the stand out property is the Iberostar Ensenachos which has an entire island to itself as well as one of the best beaches anywhere in Cuba. Overall levels of service aren’t quite what they might be but this is still one of my favourite beach hotels in Cuba and works well as a 3 centre holiday combining Havana, Trinidad and then the beach travelling via Santa Clara.

Further along Cuba’s north coast, the twin island resorts of Cayo Coco and Cayo Guillermo are home to a further 4 Iberostar hotels. The Iberostar Pilar & Iberostar Cayo Coco are broadly similar in standards while the Iberostar Daiquiri is just a hotel that I have never really warmed to; there’s nothing wrong with it, and there are many worse beach hotels in Cuba, but there are also many more appealing options. The Iberostar Playa Pilar, on Cayo Guillermo, is the most recent addition to the Iberostar Cuba portfolio and, although I like its crisp, modern style, it’s lacks the direct beach access that you take for granted in Cuba.

The final Iberostar Cuba beach hotel is located on Cayo Largo, located off Cuba’s southern coast in the Caribbean. Previously known as the Hotel Ole Playa Blanca, the property was re-branded as the Iberostar Cayo Largo on 1st November. It is the furthest hotel from Playa Paraiso, Cayo Largo’s best beach, but it is also located on its own stretch of beach away from the island’s other hotels, a popular feature for many of its guests.