Old Havana Hotels With A Pool 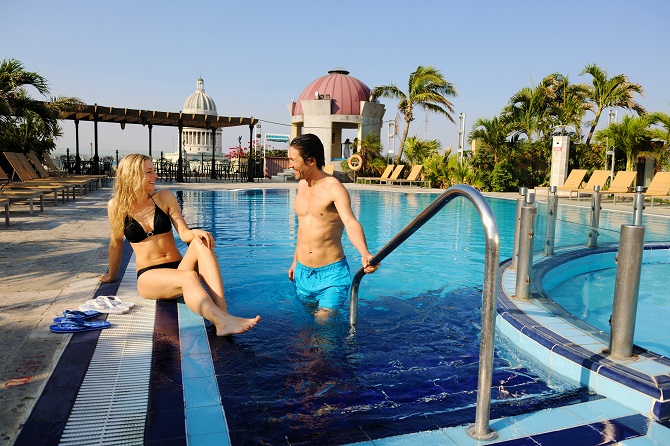 For the majority of independent travellers visiting Havana, staying in the historic heart of the city – Old Havana – is a must. Being able to walk out of your hotel door and have almost all of the city’s many highlights within a short stroll is hard to argue against. Having a hotel with a pool, especially in the hot and humid summer months, is also an undoubted draw. So what are the options?

The Hotel Saratoga is the closest that Havana comes to boutique-grade accommodation and is the most expensive hotel in Havana. With just 96 contemporary rooms, 24 hour room service, concierge and attractive bar & restaurant, the Hotel Saratoga has been the most stylish place to stay in Havana since it opened in 2005.

The hotel’s pool, not the biggest it must be said, is located on the rooftop and makes up for any limitations in size with wonderful views, especially over the iconic Capitol building.

The Hotel Parque Central, as its name suggests, fronts onto the Parque Central, one of Havana’s main public squares. However, the hotel itself actually comprises two very separate buildings; the ‘older’ part, sometimes referred to as the Classic Wing, dates back to the end of the 20th century and is the one that is most commonly used in any promotional shots. The newer wing, built behind it and separated by a road, is less than 10 years old and, to be frank, looks more like an office block.

Between them, the hotel has some 420 rooms and, because the entire property is a new-build, everything works – not always the case in Cuba! Rooms are amongst the largest in Havana and fitted out as one would expect of an international 5* hotel. The hotel also boasts rooftop swimming pools on top of both wings, with the Classic Wing again being the nicer and certainly boasting the better views. Compared to the Hotel Saratoga, and purely in terms of the pool, the Hotel Parque Central wins hands down.

The last of the 3 hotels in Old Havana with a pool is the Hotel Sevilla. Built in the 1930s and made famous by Graham Greene in ‘Our Man in Havana’, the Hotel Sevilla is a more modest property than both the Parque Central & Saratoga, although you wouldn’t know it from the prices it is now charging However, it does have attractive public areas and a pleasant ground level swimming pool.

The rooms at the Sevilla are slightly disappointing, and the popularity of the hotel with tour groups can leave the staff slightly frazzled, but, with such limited alternative options, the hotel remains a popular choice.

Update April 2020: Since this article was written, a further 3 hotels have opened in Old Havana with swimming pools, all luxury properties. They are the SO Paseo Del Prado La Havana, Iberostar Packard and Kempinski La Habana.