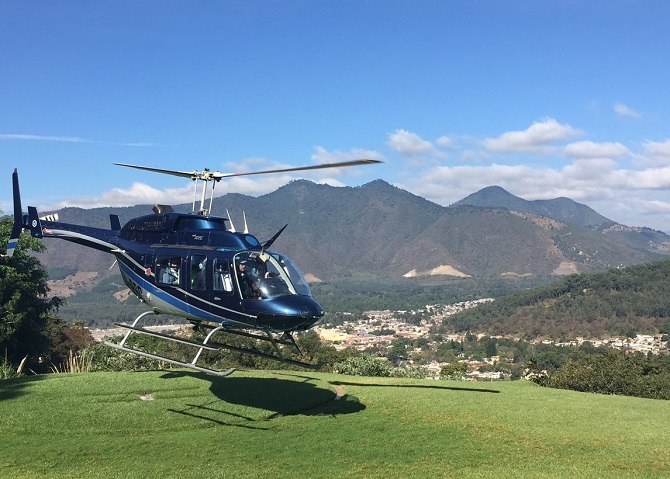 A relatively small country, dominated by a single major city and distinguished by its mountainous terrain, Guatemala has just one domestic flight route, that between Guatemala City and Flores.

However, Guatemala also has its own wealthy, business elite and, like their colleagues around the world, time is money etc etc. So, with little in the way of domestic flights and roads that can get clogged up for hours in Guatemala City, what’s the answer? Helicopters!

If you travel around Guatemala for any length of time, but especially around Guatemala City, Lake Atitlan or even Coban, you are almost guaranteed to see a helicopter in-flight. It’s amazing how many hotels feature (and proudly promote) having their own heli-pads.

On an overnight stay at the luxurious Casa Palopo on Lake Atitlan, being the height of the low season (the only reason I was able to stay there I should add), the hotel was largely empty of foreign tourists although there were a handful of local families having lunch in the restaurant. Having finished my own lunch and retreated to the pool to test the facilities, my slumber was interrupted by not one but two helicopters taking off from just behind the hotel. Enquiring with the staff later, they happily confirmed that yes, two separate families had popped over from Guatemala City for lunch.

Many of the very wealthy in Guatemala City own their own helicopters but, for those that don’t, chartering one is both simple and relatively common-place. It’s not just locals either. For visitors to Guatemala seeking a luxury holiday, or perhaps travelling on their honeymoon, what better way to begin one’s holiday than by taking a helicopter transfer? Flights from Europe all arrive in the late evening so one can simply overnight in the city, have a leisurely breakfast and then enjoy a breath-taking helicopter ride to Lake Atitlan. I find it hard to think of a more spectacular start to a holiday.