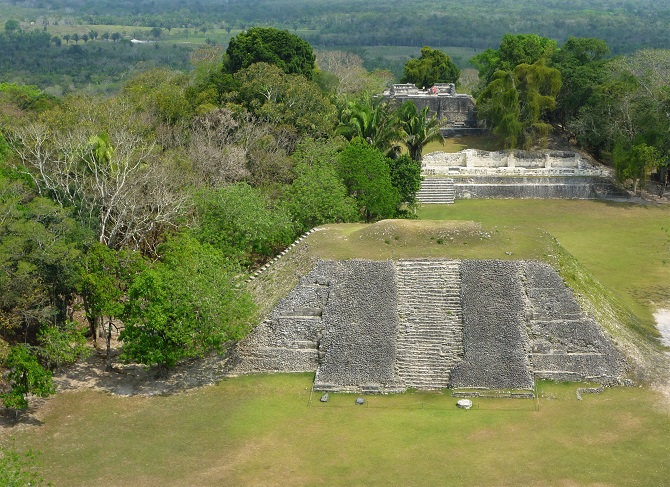 Pronounced ‘Shoo-Nahn-Too-Nich’, Xunantunich means Stone Woman in Mayan, referring to a ghost who was said to inhabit the site. However, this story only dates back to the late 19th century and the original name of the site remains a mystery.

Settlement at Xunantunich can be dated back to the Pre Classic Period (up to around 250 AD) although it only rose to prominence from 600 AD onwards, reaching its peak from 780 to 980 AD, later than most other Mayan cities in the region. As with all the other Mayan sites in the region, Xunantunich then went into decline (the reasons are still disputed by historians) before being abandoned although, just as its rise to prominence came relatively late, so it seems to have hung on later than most of its peers.

It then wasn’t until the end of the 19th century that the site was ‘re-discovered’ by the outside world, the first excavations being conducted by Thomas Gann, the British commissioner of Cayo district.

Today, located just 15 minutes’ drive from San Ignacio, Xunantunich is a popular visitor site although it never gets particularly crowded.

Covering roughly one square mile, at the heart of the site is El Castillo, a towering pyramid which is the second tallest building in Belize (the tallest is the main pyramid at Caracol!). As Xunantunich itself was built on top of a large hill, the views from the top of the 130-foot high El Castillo are truly spectacular, taking in sweeping vistas of the surrounding countryside, including nearby Guatemala.

Although El Castillo is the largest building at Xunantunich, it is by no means the only structure of note. Both in front and behind El Castillo are many other restored buildings which, together, make this one of the most impressive Mayan sites in Belize and one which deserves a couple of hours.

Apart from its history, numerous structures and wonderful views, Xunantunich is also home to a troop of howler monkeys who can often be spotted hanging from nearby trees.

All tour operators and travel agents will offer guided tours to Xunantunich although, if you don’t want a guide, it’s easy enough to arrange a taxi in San Ignacio; just remember to agree a price that includes them waiting while you explore the site and then taking you back.

Simply getting to Xunantunich is also part of the attraction of any visit, including as it does making the short crossing of the Mopan River by hand-cranked ferry.

Other nearby Maya sites include Cahal Pech, Buenavista del Cayo and Naranjo. San Ignacio is also a popular base for visiting Belize’s largest Mayan site, Caracol, some 2 hours’ drive to the south.