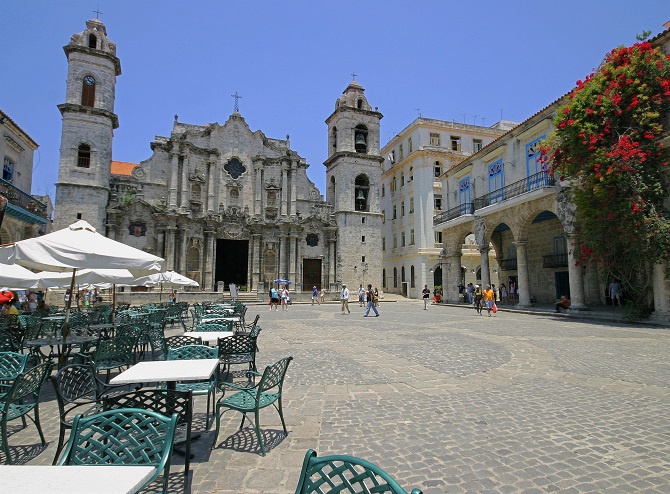 The Ultimate Cuba Tour is a small, group escorted tour that takes in pretty much the whole island in two weeks.

However, although promoted as a single, two-week journey around Cuba, the Ultimate Cuba Tour is in fact two separate, week-long tours of the island, one of the west followed by one of the east, that are combined to create a two-week itinerary.

When promoted in its own right, the first week (the tour of western Cuba) is known as the Essential Cuba tour. This tour starts and finishes in Havana and includes other key destinations such as Vinales, Las Terrazas, Cienfuegos, Trinidad & Santa Clara. Further details on the Essential Cuba tour can be found by clicking here.

The reason for combining two separate tours in this way is that the vast majority of visitors to the island stick to the western half of the island, either returning home at the end of the tour or, more commonly, tacking on time at the beach afterwards.

So, what about the second week which, again, is promoted in its own right, this time as the Essence of the East tour?

Well, having returned to Havana, the next morning clients are collected from their accommodation and taken to the airport for the flight to Holguin. On arrival in Holguin it is then an approximate two-hour drive to the charming and historic colonial town of Bayamo.

Bayamo is one of the most important towns in Cuban history, and full of charm, but receives very few visitors; not helped, it must be said, by only having just the one hotel in the town centre.

The following morning, the tour heads up into the beautiful Sierra Maestre, to Santo Domingo, where there are views across to Pico Turquino, Cuba’s highest mountain. In addition to the lovely surrounding countryside, the area was home to Fidel Castro’s former HQ at La Plata, a walk to which is included in the afternoon.

The next morning, there is time to relax and enjoy the peace and quiet around the hotel, Villa Santo Domingo, before resuming the drive east to Santiago de Cuba. En-route to Cuba’s second city, a brief stop is included at El Cobre, the country’s most important and venerated pilgrimage site. Arriving in Santiago in the afternoon, clients are free to explore on their own or relax at the pool of the hotel Melia Santiago de Cuba.

Cuba’s second city feels very different to Havana, less Latino and more Caribbean while a full morning tour of the city will include visits to the infamous Moncada Barracks, lively Parque Cespedes, Lucha Clandestina and Morro Castle. The afternoon is free for clients to explore on their own or relax back by the pool. Dinner that evening will be taken in the city, after which I’d recommend that clients end their evening with a visit to the famous Casa de la Trova.

View from the Morro Castle

The following morning, Day 5 in effect, the tour departs Santiago and heads along the south coast. After a brief stop in the town of Guantanamo, made famous by the nearby US military base, the previously flat, featureless journey soon gives way to the spectacular La Farola, probably the most scenic drive in Cuba, and the link road to the wonderful, coastal town of Baracoa.

Regarded as the oldest, colonial town in the Americas, and the point at which Christopher Columbus first came ashore, Baracoa might lack the grand colonial architecture of, say, Trinidad, but its laid-back vibe, dramatic setting and beautiful, surrounding countryside combine to make it a real traveller’s favourite.

After a relaxed afternoon on Day 5, the following day includes a visit to the nearby River Toa, which runs through a protected UNESCO Biosphere. After a picnic lunch, the tour continues to Finca Duaba, a small plantation where some of Cuba’s highly regarded, but very hard to get hold of, cocoa is grown.

Returning to town in the afternoon, the rest of the day is at leisure for clients to explore on their own or simply relax. Dinner is served either in the hotel or at a restaurant and, afterwards, there are plenty of places to enjoy Cuba’s famous live music scene.

After six nights, the Ultimate Cuba Tour now comes to an end. Clients who are returning to the UK will catch the Sunday morning flight from Baracoa back to Havana for a final night back in the capital.

Those clients wishing to extend their stay at the beach have two choices. They can either catch the same flight back to Havana and then transfer straight to a nearby beach hotel, such as Memories Jibacoa OR they can travel by road, overland from Baracoa to Guardalavaca (approx four hours), possibly Cuba’s most attractive beach resort and home to probably its best beach hotel.