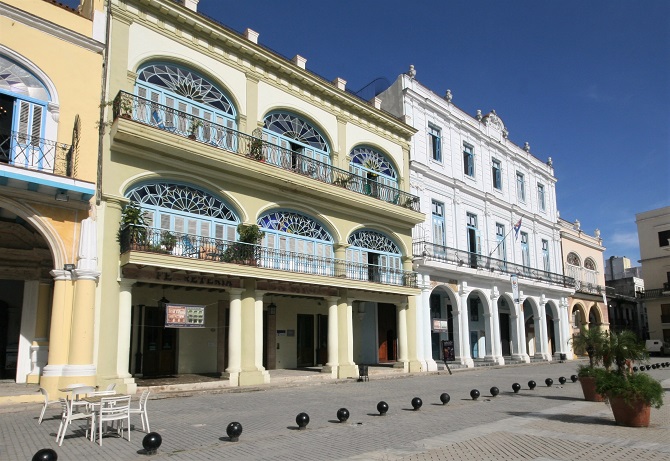 Old Havana and its fortifications (1982)

The first Cuban UNESCO World Heritage Site, the best known and by far the most visited, is the historic heart of the capital, referred to as Old Havana (Habana Vieja). Located on the eastern edge of the city, with the ocean and harbour forming 2 sides to it, Old Havana is full of narrow, colonial-era streets, grand squares and magnificent civic buildings, some now beautifully restored, others in a state of near total neglect. Visiting Old Havana is a must on any holiday to Cuba and I’d recommend at least 4 days.

Trinidad and the Valley of the Sugar Mills (1988)

After Havana, the small town of Trinidad on the island’s south coast was the second location in Cuba to be awarded UNESCO World Heritage status and, as with Old Havana, is a must for anyone wishing to explore the country. Although much smaller than the capital, this 16th century colonial town is beautifully in-tact, so much so that it is often described as a museum town. To the east of town, and also part of the same UNESCO designation, the Valley of the Sugar Mills was home to the sugar industry from which the region derived its wealth.

Before Havana, Santiago de Cuba was the island’s capital city and the San Pedro de la Roca castle was built to protect the entrance to its harbour. In relative terms, far fewer visitors make it to eastern Cuba but, for those that do, the castle (often referred to as the Morro Castle) is a short drive from the city and well worth a visit. For more information, please refer to my previous article.

Granma is the name of the boat on which Fidel Castro and Che Guevara travelled from Mexico to Cuba to launch the Cuban Revolution. This large national park, located on the south-eastern tip of the island is 1 of 2 Cuban UNESCO Natural Heritage sites and “represents a globally significant example of geomorphologic and physiographic features and ongoing geological processes”. As one of the most remote parts of Cuba, very few tourists make it this far and facilities / services are very limited.

Located some 2 hours’ drive west of Havana, the Vinales Valley is known for its beautiful countryside, iconic limestone mogotes and world-famous Cuban tobacco. Although popular as a day trip from Havana, there is enough to see and do to warrant spending a few days in the area especially as the town of Vinales is one of the most charming and picturesque in Cuba.

Just as Trinidad and the Valley of the Sugar Mills is famous for its numerous, abandoned sugar plantations, so the foothills of the Sierra Maestre in eastern Cuba are home to the ruins of 19th century coffee plantations, a testament to both the ingenuity of their (mainly) French owners and the hard work of the slave workers in incredibly challenging natural conditions.

Located an easy drive north of Baracoa, the oldest settlement in Cuba, Alejandro Humboldt National Park is “the largest and best-conserved remnant of forested mountain ecosystems in the Caribbean ….and widely considered to be Cuba’s most important protected area for its extraordinary biodiversity values”. Well of the main tourist trail, but still accessible, this is a must for visitors to Cuba whose main focus is the island’s natural appeal.

With nearby Trinidad having been awarded UNESCO status in 1988, the inhabitants of the much larger town of Cienfuegos were delighted when the historic merits of their own city were finally recognised some 17 years later. One of the first, and most successful, examples of 19th century urban planning in Latin America, the centre of Cienfuegos is home to fine civic buildings including its most famous example, the Teatro Tomas Terry.

The most recent Cuban UNESCO World Heritage site, the city of Camaguey is situated roughly in the centre of the island so anyone travelling the length of the country will spend at least a night here. Although not as visited as Havana, Cienfuegos & Trinidad, Camaguey is one of Cuba’s 7 original ‘villages’ and is noteworthy for the entirely irregular nature of its layout, designed, so it is said, to confuse marauding pirates. Visitors to the city still get lost today although there is plenty to admire in the city’s architecture which covers neoclassical, eclectic, Art Deco, Neo-colonial as well as some Art Nouveau and rationalism.