Birdlife of Cuba – A Traveller’s Tale 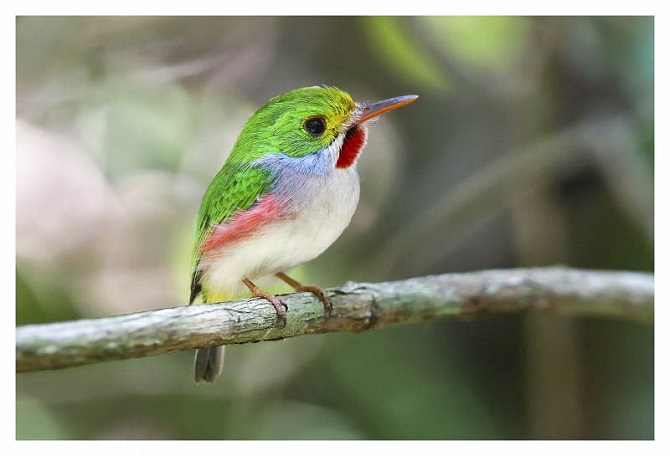 The following is a 2006 report recounting a holiday centred on the birdlife of Cuba – the birds are the same but Cuba itself is changing fast.

The photos are courtesy of Nils Navarro, one of the foremost experts on the birdlife of Cuba. He lives in the town of Vinales with his wife and young family and acts as a local guide. He can be contacted directly via email at nilsarts71@gmail.com and speaks fluent English.

“Cuba’s diverse variety of 354 species of birds was one of the main reasons why my wife Rosalind and myself chose to visit Cuba in January.

Little did I think, while soaking up the many vibrant sounds and sights of Havana, would I see the world’s smallest bird in the area of the swimming pool at the elegant Sevilla Hotel. This hotel is alongside the busy main Prado with its classic American cars belching black smoke and oil. To claim that the bee-humming bird is a guest, if not a resident, would surpass the hotel’s photographs of the Great Caruso and Graham Greene, as their most famous visitor.

After five days embracing the music, dancing and other delights of the capital city, we nervously began our rented car journey along Cuba’s notorious roads, heading west towards the tranquillity of Las Terrazas. On route, the ubiquitous turkey buzzards were hovering above, eagle–eyed for casualties of the endless potholes, puncturing the main road to Pinar del Rio.

Las Terrazas, a reforestation project in the mountains was a haven for birds. The contrast in size between the large black Cuban crow and the little house wren testified to an abundance of vegetation. Whilst emerging from a swim beneath a waterfall, three rows of bullet holes caught my eye midway up a tree trunk.

Below these was a busy juvenile yellow-bellied sapsucker, sipping the exuded nectar and gorging on the insects attracted to it.

After two wonderful days, we said goodbye to the Pinar del Rio province and began our journey southeast, heading for the Bay of Pigs and the mangrove swamps of La Salinas.

Playa Larga, a resort in the wild life park, proved to be an absolute jewel. We picked up our guide at 8-30 a.m. on the following morning and drove into the restricted area. Within a few minutes the guide pointed out the common black hawk that had settled on a branch above us. We saw a yellow warbler and also saw a blue-grey gnatcatcher in the bordering woods. This was followed by sightings of an array of woodland birds of all colours, shape and song. The guide’s English was limited but he was able to refer to the appropriate picture in the Field Guide. He mimicked the bird songs and this drew them into view. The highlight was the endemic Cuban Tody, who raised its beak upwards and out of its rosy red throat, rendered us a superb solo from a distance of a few feet.

On reaching the swamps the most beautiful waders displayed their myriad colours. Of the four different species of heron, which vied for our attention, the little blue heron just shaded the beauty contest. The elegance of the Great, Reddish and Snowy Egrets continually attracted our gaze. The Roseate Spoonbill, sweeping its bill through the water was a magnificent sight in its full plumage. This was followed by the graceful flight of the Glossy Ibis directly overhead and a solitary stork.  Last, but by no means least, was the memorable sight of large flocks of blazing red Greater Flamingos, wading in unison, emitting loud goose-like honking sounds. This was a fitting finale to a wonderful three hours that seemed to have flashed by. (All for the princely sum of 12 pesos i.e. £8.)

On the return to our chalet, the guide pointed out a wreck on the beach that was one of the landing crafts used in the abortive U.S. Bay of Pigs invasion.

He then took us to a ‘Paladar’, which is a new concession by the government to allow people to serve meals in their houses for payment. That evening, we dined there in style with a typical, friendly and warm Cuban family.

Reluctantly saying goodbye to the Zapata Peninsula, we travelled east through large sugar cane and banana plantations via Cienfuegos where we stayed for two nights, met the Irish and danced with the Cubans! We then headed further east towards the UNESCO heritage site of the town of Trinidad. Before reaching Trinidad we explored a potholed mountain road, guarded by two American kestrels, towards an old coffee plantation. This mountain road was the course of a bicycle road race in the heat of the day. The cyclists were chaperoned by a motorcyclist laden with dozens of spare tyres draped around each shoulder!

In Trinidad, the nearby beach and lakes of Playa Ancon gave us further bird watching opportunities. A Greater Egret seemed to permanently patrol the small area of lake as we saw it there on three consecutive evenings. This vibrant little town had everything! Whilst we were there, we had a wonderful trip on an old steam train that was driven by diesel oil. We were taken through the lush sugar cane plantations, stopping to visit two old haciendas in the beautiful Valle de Los Ingenios.

Four days later we travelled north inland heading for Santa Clara, the sight of Che Guevara’s moving memorial and his decisive battle in the Revolution. We stayed in the environmentally friendly Los Caneyes where I enjoyed watching the antics of some red-legged thrushes. Here I checked the security system by leaving our key outside in the door all night!! We decided to take a day trip along the new 100$ causeway which leads to Cayo Santa Maria. Despite its many bridges to aid wild life, we saw few birds apart from a couple of cormorants and egrets. On reaching Santa Maria we sadly could find no public beaches, as the hotels had commandeered them.

The final part of our holiday was a five day stay in Jibacoa, one and a half hours drive east of Havana on the north coast. On a hike out from our hotel I asked the guide to identify a long tailed bird, perched on a branch two metres away. He replied that it was a ‘Gato’ as it makes the sound of the screech of a cat. Having spent forty years watching birds and having seen only one solitary cuckoo in Britain, I was overjoyed to learn from my ‘Birds of Cuba’ by Garrido and Kirkconnell that the ‘Gato’ was an adult Greater Lizard Cuckoo.

Further along the path, the guide showed us what was in the many holes (4cm diameter) that punctuated the path. I copied what he did by picking a long piece of grass and licking one end. I then put the licked end into the hole and proceeded to entice a brown furry tarantula to the entrance.

Back at the hotel, the Greater Antillean Grachos and Cuban blackbirds were swooping onto the patio restaurant tables to snatch scraps of food. They obviously knew it was an all-inclusive hotel!!  This is also where we saw the slow ponderous flight of a flock of brown pelicans and a West Indian woodpecker climbing a palm tree.

After three weeks, we reluctantly had to say goodbye to the paradise island of Cuba”