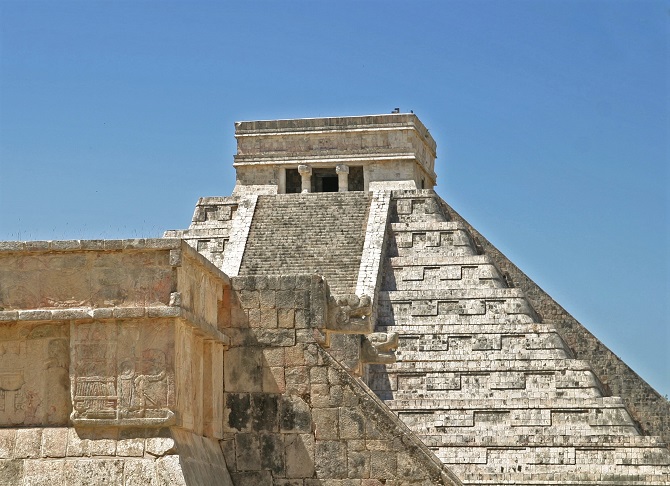 There are over a thousand Mayan sites dotted across Mexico’s Yucatan Peninsula so, unless you plan to move to the region permanently, chances are that you will struggle to visit even 1% of them.

However, just as African wildlife safaris have their ‘Big Five’, in terms of the key animals that most visitors wish to see, so the Yucatan has its ‘Big Four’ sites – namely Chichen Itza, Uxmal, Calakmul and Tulum.

The ballcourt at Chichen Itza

The best known Mayan site in the Yucatan, and easily the most visited, is Chichen Itza, a UNESCO World Heritage site since 1988. Comprehensively cleared and excavated, and located just 3 hours’ drive inland from the east coast, Chichen Itza attracts over a million tourists a year; and while it’s perfectly feasible to visit on a day-trip, it is far more enjoyable to stay locally, either at one of the hotels near the ruins (such as the wonderful, old Hacienda Chichen Itza) or in nearby Valladolid. Not only does Chichen Itza merit more than a couple of hours trailing around in a group, staying nearby also allows one to visit before or after the coach tours arrive and in cooler weather conditions. There is also plenty to see and do nearby including some beautiful cenotes.

Historically, Chichen Itza was a major city in the North Maya Lowlands and one that reached its ascendancy relatively late in Mayan history, ranging from 600 to 1200 AD (Late Classic through Post Classic periods). For more detailed information about the history of Chichen Itza we suggest you visit the following site.

Located roughly midway between the colonial cities of Merida and Campeche in the west of the Yucatan is the second of the region’s major Mayan sites, Uxmal. Pronounced ‘Ooshmal’, the name Uxmal is thought to mean ‘thrice built’ although this isn’t always agreed on.

Located far from the beach hotels of the east coast, Uxmal gets a fraction of the visitor numbers of Chichen Itza but is considered by many to be the more attractive with beautiful architecture, lush surrounding countryside and far less people to ruin your photos. A good range of accommodation is available right at the site (our favourite is Hacienda Uxmal – even though it’s not a real hacienda!) but it is also possible to visit Uxmal from Merida, Campeche or one of the relatively nearby, luxury haciendas such as the Hacienda Santa Cruz and Hacienda Temozon.

Historically, Uxmal dates back to the Classic Period and was the largest city in the Puuc Hills region which includes several other, smaller Mayan sites such as Labna, Kabah & Sayil. With its rounded corners, Uxmal’s Pyramid of the Magician is perhaps the most beautiful of any Mayan buildings and it is almost worth the visit on its own. For more detailed information about Uxmal we suggest a visit to the following site.

The third of our ‘Big Four’ Mayan sites is Calakmul, located in the jungles of the southern Yucatan, not far from the Guatemalan border. We don’t have visitor numbers but it would seem realistic to say that Calakmul probably gets the same number of visitors in a year as Chichen Itza gets in a day. Located an hour’s drive from the main road, and located within the Calakmul Biosphere, the Mayan ruins themselves are still almost entirely covered by dense jungle; the only exception to this is are a handful of giant pyramids which break out above the jungle canopy and offer 360 degrees that can only be described as a sea-of-green.

As you might expect with such a remote site, accommodation options are somewhat limited with the nearest, and best, option being the Puerta Calakmul near the main road. Calakmul is also not somewhere one simply stumbles upon and is generally only visited as part of a circular holiday around the Yucatan.

Historically, Calakmul is one of the Yucatan’s oldest sites, dating back to the early Classic Period, as well as one of its largest; at its peak, Calakmul is thought to have had a population of at least 50,000 people. Located in the Peten Basin, Calakmul was one of a number of city-states in the region and was often in fierce competition with the most powerful of these, Tikal, located across the border in modern-day Guatemala. For more detailed information about Calakmul we suggest a visit to the following site.

The fourth and last of our ‘Big Four’ Mayan sites is Tulum, conversely one of the smallest sites in the region. Limited in scale and not especially significant historically, the reason that Tulum is included is because of the vast numbers of visitors it attracts, not to mention the number of photos that one will come across of the ruins.

The appeal of Tulum is very simple – location, location, location. The ruins of Tulum are to be found on the Yucatan’s east coast in an extraordinarily photogenic location, situated on a rise overlooking the most perfect white, sandy beaches and clear, turquoise sea. Forget the architecture and history of Tulum, this is all about that perfect, picture-postcard setting. Young children will never be more loathe to leave a historical site – where else can you combine history and sandcastles after all?

Accommodation options are very simple as there are hundreds of hotels lining the entire east coast of the Yucatan, including some beautiful, uncommercial hotels to the south of the ruins. Favourites include the Hip Hotel Tulum and the stylish Hotel Rosa del Viento.

Note About Palenque – Many people would include the Mayan ruins at Palenque as part of a ‘Big Five’ and certainly the ruins are very impressive. The only reason we haven’t included them is that they aren’t located in the Yucatan Peninsula. For anyone desperate to include them in any holiday, they are an approximate 5 hour drive from Campeche, heading north.

Of course, Mexico’s Yucatan Peninsula only forms part of the Mundo Maya, home to even more incredible ruins.