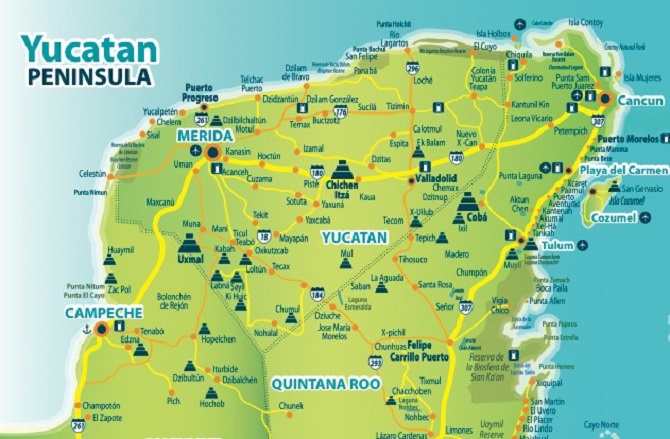 UNESCO: “This sacred site was one of the greatest Mayan centres of the Yucatán peninsula. Throughout its nearly 1,000-year history, different peoples have left their mark on the city. The Maya and Toltec vision of the world and the universe is revealed in their stone monuments and artistic works. The fusion of Mayan construction techniques with new elements from central Mexico make Chichen-Itza one of the most important examples of the Mayan-Toltec civilization in Yucatán”.

We Say: You can’t really visit the Yucatan Peninsula and not include Chichen Itza. However, if you want to avoid the crowds it’s best to stay nearby (perhaps in Valladolid) and visit either early morning or late afternoon.

UNESCO: “In the language of the Mayan peoples who once inhabited this region, Sian Ka’an means ‘Origin of the Sky’. Located on the east coast of the Yucatán peninsula, this biosphere reserve contains tropical forests, mangroves and marshes, as well as a large marine section intersected by a barrier reef. It provides a habitat for a remarkably rich flora and a fauna comprising more than 300 species of birds, as well as a large number of the region’s characteristic terrestrial vertebrates, which cohabit in the diverse environment formed by its complex hydrological system”.

We Say: Located at the southern end of the famous Riviera Maya, the Sian Ka’an biosphere is a beautiful and crucial nature reserve that stands in contrast to the commercial excesses of Cancun. It can easily be visited from pretty much anywhere along the east coast.

UNESCO: “The Mayan town of Uxmal, in Yucatán, was founded c. A.D. 700 and had some 25,000 inhabitants. The layout of the buildings, which date from between 700 and 1000, reveals a knowledge of astronomy. The Pyramid of the Soothsayer, as the Spaniards called it, dominates the ceremonial centre, which has well-designed buildings decorated with a profusion of symbolic motifs and sculptures depicting Chaac, the god of rain. The ceremonial sites of Uxmal, Kabah, Labna and Sayil are considered the high points of Mayan art and architecture”.

We Say: Rightly famous for its beautiful architecture, Uxmal is within easy reach of the cites of both Campeche (see below) and Merida, but far enough from the east coast resorts to make it far less visited than Chichen Itza.

UNESCO: “Campeche is a typical example of a harbour town from the Spanish colonial period in the New World. The historic centre has kept its outer walls and system of fortifications, designed to defend this Caribbean port against attacks from the sea”.

We Say: From a visitor’s point of view, the colonial centre of Campeche is both very attractive and incredibly laid-back ideal for those who like nothing more than to potter about on their own, simply soaking up their surroundings.

UNESCO: “The site is located in the central/southern portion of the Yucatán Peninsula, in southern Mexico and includes the remains of the important Maya city Calakmul, set deep in the tropical forest of the Tierras Bajas. The city played a key role in the history of this region for more than twelve centuries and is characterized by well-preserved structures providing a vivid picture of life in an ancient Maya capital. The property also falls within the Mesoamerica biodiversity hotspot, the third largest in the world, encompassing all subtropical and tropical ecosystems from central Mexico to the Panama Canal”.

We Say: Much of this vast city is yet to be excavated but, with so few visitors and such beautiful surroundings, Calakmul is certainly one of the Yucatan Peninsula’s most worthwhile draws.

In addition to the 5 UNESCO sites located within the Yucatan Peninsula, many visitors to the region also choose to visit the great Mayan city of Palenque, (below) located in neighbouring Chiapas state.

They are Izamal, the Banco Chinchorro Biosphere Reserve, Celestun Biosphere and the Ring of Cenotes of Chicxulub Crater.